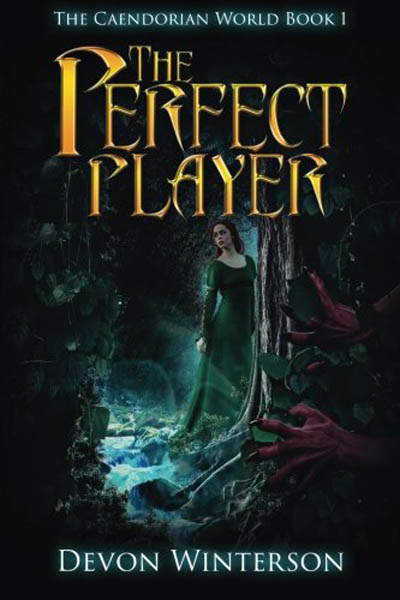 A forbidden tryst exposes a threat and sets a secret plan in motion, and twenty-year-old Marisa of Mynae discovers her life is all a lie. But even as a cryptic journal reveals her true purpose and a trail of hoofprints leads her to a demon renegade, Marisa balks at fate's course until evil devours her people and imperils her father's life. Only then does she learn what it takes to play—and win—a deadly game of predator versus prey.

MY REVIEW OF THE PERFECT PLAYER:

And I do mean what a world. Kimberly Grenfell (a.k.a. Devon Winterson) has something that most writers wish they possessed: the ability to construct an entire imaginary world with ease (I imagine she’ll be laughing at this point—ease, ha!).

But the fact is that Caendoria feels so incredibly real that I can’t imagine anyone not becoming immersed within the pages of this book. Seriously.

I bow to her superb writing skills and ability to weave a tapestry of words that manages to delight the senses and advances the plot at the same time. Where the story came from, I have no idea. There is layer upon layer of complexity without it being a complex read.

Now, there were times when words were merely ornamental trappings that escaped the chopping block, probably because there’s nothing wrong with them other than being sophisticated language. Don’t get me wrong: I’m guilty of the same crime on occasion. All writers do this from time to time simply because, well, we tend to have a big vocabulary and know what the words mean. For the average fantasy reader, this will be reminiscent of the days of high epic fantasy. This book is not a hard read, but it’s not beach material.

A few key terms were highly overused, but in the realm of fantasy, sometimes we have no other way of saying something if that imaginary world negates the use of anything else. For some reason, I feel like it might have come off less repetitive if the narrative were in first-person perspective. Repetitive thoughts sound more realistic when you’re actually in the mind of the character. I’m not sure if that makes sense, but I’m going with it. Yep.

This is not for kids. At all. Dark fantasy means dark fantasy. As a fantasy reader, I don’t usually travel over into the sub-culture that is dark fantasy. However, as I said, the world is well constructed and immersive. Also, the characters are fascinating, even the bizarrely twisted and insane ones. Especially them, I admit with only a slight twinge of shame. I love dark characters. Not because I want to be on their side. I just want to deconstruct their psychology. Did I mention I considered a major in psychology?

After all of my distracting side notes, I fear I may have lost you. No? Well, all I can say is that this book is definitely worth a read, whether you typically enjoy fantasy or not. Kimberly is a phenomenal writer. I’m actually just a little bit jealous. This was the first time I’ve read anything she’s written, so I was blown away with the level of talent she possesses. Writing is a craft, one that you can definitely see she’s been honing for years. Her ingenuity shows in every aspect of this story, from the environment, to the characters, to the detail within the plot itself. Although this book is part of an upcoming series, the story has a beginning and ending on its own.

I highly recommend The Perfect Player as a throwback to the days of high fantasy. This is truly an epic story. You can find the amazon link on my sidebar widget. I’ve also listed it on my “Recommendations” page, along with my other favorite books. I’m excited and look forward to the next book in The Caendorian World series.

“Fantasy is hardly an escape from reality. It’s a way of understanding it.” —Lloyd Alexander