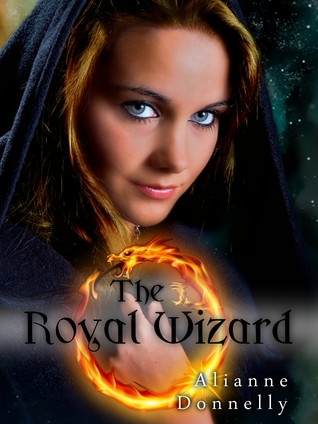 The kingdom of Wilderheim stands bastion between the world of humans and the Otherlands. It is ruled as much by people as it is by creatures Other and as such, it must always have a wizard at the right hand of its king. Nico has seen three generations of rulers sit the throne; he knows he will not see the fourth. Desperate to find a worthy apprentice, when Nia appears like a godsend in his path he wastes no time taking her under his wing as his last sworn duty to the young king Saeran.

But Nia and Saeran have many trials ahead of them. With destinies converging toward an inevitable battle for power, countless lives hang in the balance, including theirs. As love brings them together, so strife tears them apart and as the balance between justice and magic shifts, the royal wizard and her king get caught in a maelstrom of colliding forces. Nothing is ever as it seems with a trickster hiding in the shadows. When the gods begin to play, mortals tremble…

MY REVIEW OF THE ROYAL WIZARD:

Wizards, and dragons, and gods. Oh, my!

I have to admit that I’m a big fan of mythology. I’ve always loved the weaving interconnections between cultures and stories that exist because we, as humans, all have a shared history to some degree. Way, way back at least.

That’s one of the main reasons I enjoyed this book. The author uses some basic elements of Norse mythology and creates a unique story that involves original characters who come into contact with some well-known major players from the ancient Norse tales.

And she doesn’t shy away from showing both the light and dark sides to those characters and elements. I loved the way that ideas from several different types of stories were used in original ways. I loved the world she creates.

I only have two gripes, one being the relationship between the two main characters. The main characters, in my opinion, act ridiculous and silly when it comes to their relationship with one another, a fact that—when used sparingly—can lead to heightened suspense in the reader. However, in this case, it goes a bit overboard and becomes annoying. It didn’t really ring true to me as a reader (and yes, I realize this is fantasy, but characters should still act according to some semblance of normal human behavior). But maybe that’s just me.

My other issue is with the editing. Let me start by saying that it isn’t terrible, and there aren’t errors on every page. I’ve seen worse, and I’ve seen better. It can be distracting at times, though. I know that I can be a bit nit-picky because I am an editor (and an English teacher), but I’m pretty forgiving when written for style or effect. As an author myself, I know how successful these things can be when used properly, but that’s not what I’m referring to here. When it’s a small typo here and there, fine. There were quite a few blatant errors, many of which were repetitions of the same problems, something that could be fixed by an editor. I will say, though, that I’ve noticed more and more errors in TRADITIONALLY published books that would presumably have PROFESSIONAL, EXPERIENCED editors looking them over (it’s scary at times). In those cases, I don’t really blame the author, as it isn’t their job to fix the problems, and they don’t usually have a lot of say-so when they are contracted through a company. However, if you don’t hire an editor (or you ignore what the editor tells you to fix), you have to own those mistakes yourself. So, I don’t feel that this author is much different from popular authors in her writing ability (which is strong), but I do think she should take the time to make corrections.

In the end, though, the story is engrossing enough to keep you going. The ending made up for the slower beginning segments and answered many questions, leaving you with a clear sense of a satisfying ending to the story. I would be interested in reading the next book when it comes out, and I do have another of hers on hand to start soon. The Royal Wizard was worth the time and money spent, and I look forward to more of her work (and artwork, which she certainly has a gift for). I like her writing style and her ability to weave a great story, so I do recommend this book with a solid 3.5 stars.