Not Your Mama's Spaghetti and Meatballs

I’ve kept you waiting far too long. I’m sorry. But there is more Italy to come, with tons of pictures in this edition of “Not Your Mama’s Spaghetti and Meatballs!” On to part 5….

Venice may be considered the Serenissima (most serene), but Tuscany is where I found my peace. 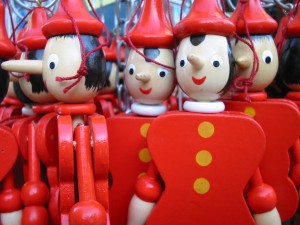 When we first began seeing little knick-knacks, pictures, objects, images—all featuring the dear little wooden boy—we were at the beginning of our journey, back in Lake Como. We assumed it was just the fact that we were in quaint little towns with quaint little shops. I mean, I knew Pinocchio and Geppetto were Italian, but he was EVERYWHERE (The entrance to the area leading up to our b&b contained a giant bust of a boy with a feather in his hat. At first, we thought it was Peter Pan or something. We learned pretty quickly after visiting the nearby towns.)

Then we began to suspect the cheeky little monkey was following us. Every town we visited—practically every shop—contained something with his likeness. When I looked it up, it turned out that they were from an unnamed town in Tuscany. So cue Tuscany.

And even MORE Pinocchio. They don’t play around with their Pinocchio.

Despite their fascination with him, he was not the heart and soul of Tuscany for me. This was the part of the trip I was looking forward to the most. I couldn’t explain why exactly, but I begged Jason to fit it into our trip. It was a place I’d always dreamed of visiting. 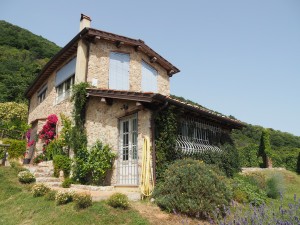 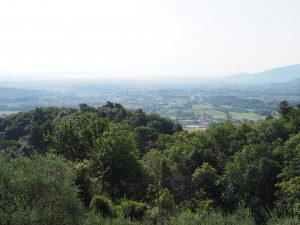 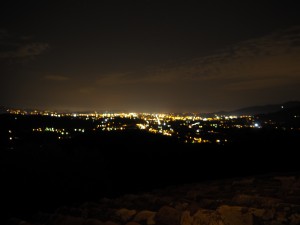 Six days and nights on a mountain overlooking the town of Lucca. We stayed at Casa del Belvedere. a beautiful farm where they produce their own olive oil and figs, among other things. The owner greeted us at the farmhouse we were renting through Airbnb with a bottle of homemade olive oil, homemade fig jam, and a bottle of homemade dessert wine to go with the delicious cake his mother-in-law had baked us as a welcoming gift. 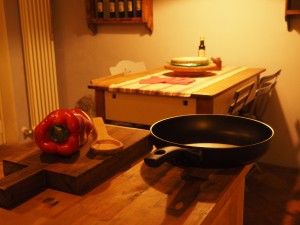 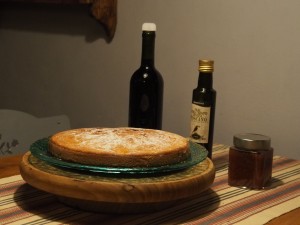 The vineyards were literally everywhere. Rolling hills, quaint little farms, spectacular vistas. Italy is the most amazing country I have ever visited, and Tuscany has sealed itself as my absolute favorite destination ever. 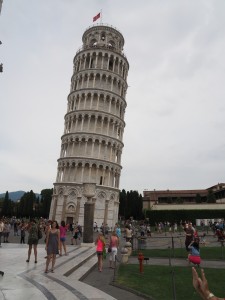 Of course, you can’t visit Tuscany without seeing the Leaning Tower. We spent a day there, taking a tour up the tower (cue more climbing and more of my foot problems…but it was my decision not to miss out on anything) and visiting the surrounding attractions and museums. 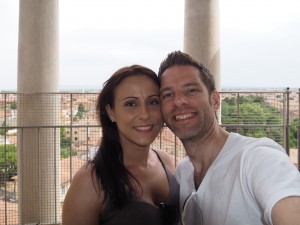 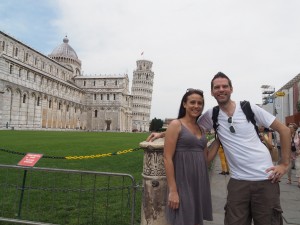 We even managed to catch another geo-cache there (did I mention the geo-caching yet?). We did at least one in each area we stayed at, but if you don’t know about geo-caching, you should definitely look it up. I thoroughly enjoy it as a side adventure when you are out and about sightseeing. 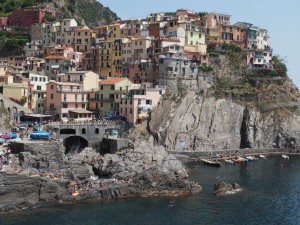 Cinque Terre was our next stop, and let me tell you: the picture may look just like all the others ones you’ve seen online, but it doesn’t do it justice. The colors are so vivid. 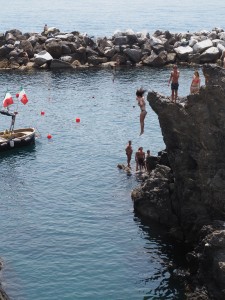 Thankfully we opted out of the cliff-diving and instead did some sightseeing then spent some time on the beach before having dinner by the seaside. When we finally decided to brave the water, it was freezing. Freezing. This is the Mediterranean, people! 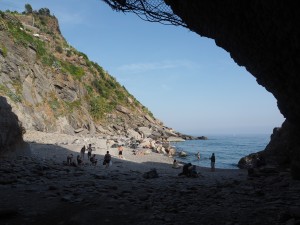 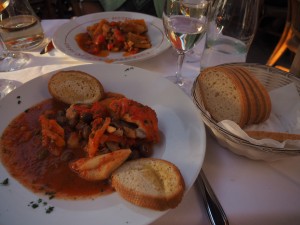 Florence, the birthplace of the Renaissance. The very essence of my soul. This was where I wanted to go more than anywhere else. I was so excited, not for any specific thing, but just for what the city represents. 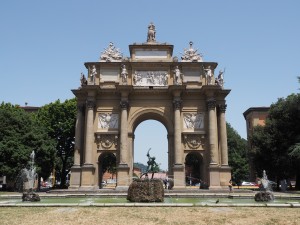 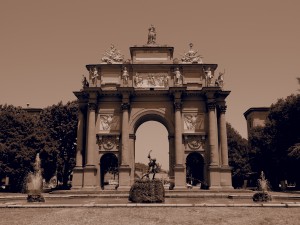 I had been going on and on about Florence since before we even started planning the trip, so there was no way I was missing out on it. There’s so much art and culture there, so many old buildings that ooze history. The Campanile, or Bell Tower, in Florence, is part of the Duomo complex, which includes the Cathedral of Santa Maria del Fiore (Duomo) and the Baptistery. After the Duomo, the Campanile is one of the most recognizable buildings in Florence. 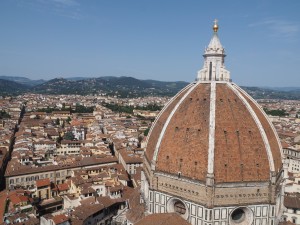 We climbed the Campanile (my feet were in HELL at this point, but I refused to stop) to check out the view of the top of the Duomo and the scope of the town, which was well worth it. It was incredibly windy, but you could see for miles. As we stood there, I began to cry as a feeling of missing something I’d only just obtained swept over me. I didn’t want to say goodbye. 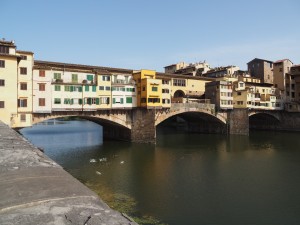 The Ponte Vecchio (“Old Bridge”) is a Medieval stone arch bridge over the Arno River, in Florence, Italy, noted for still having shops built along it, as was once common. (Wikipedia) 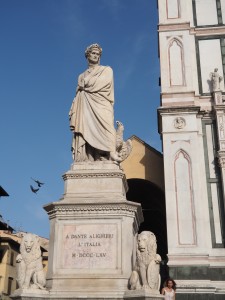 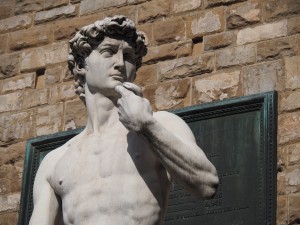 San Gimignano, admittedly, only came up on our radar because of its connection to Assassin’s Creed. The town is small, but we decided to check it out due to our familiarity with it, as well as the online images and descriptions. San Gimignano, known as the Town of Fine Towers, is a famous walled medieval hill town in Tuscany, in the province of Siena. The streets were cobble-stoned and narrow, and the architecture certainly lived up to the medieval feel. We spent some time at the top of the large tower, and ended our day in the gardens strolling as we listened to the man playing music in the main courtyard. At one point, we got sneaky and went scrumping up a tree for a plum 🙂 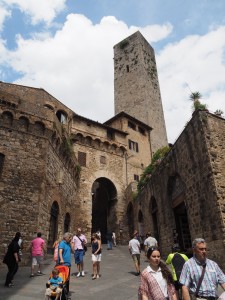 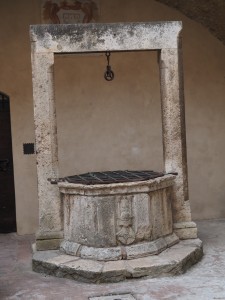 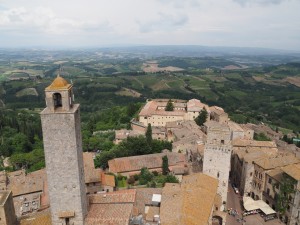 No travel guide will ever do justice to the magnificence of the Tuscan countryside. 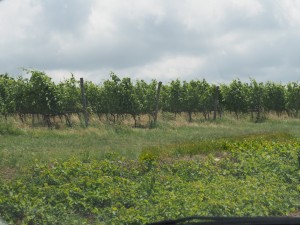 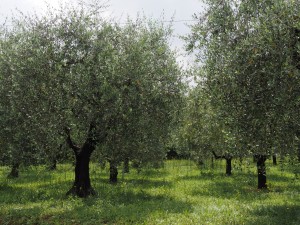 Stay tuned. Next up, Rome…