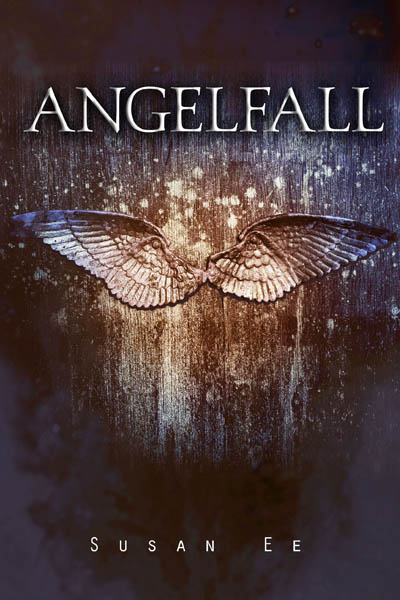 It's been six weeks since angels of the apocalypse descended to demolish the modern world. Street gangs rule the day while fear and superstition rule the night. When warrior angels fly away with a helpless little girl, her seventeen-year-old sister Penryn will do anything to get her back.

Anything, including making a deal with an enemy angel.

Raffe is a warrior who lies broken and wingless on the street. After eons of fighting his own battles, he finds himself being rescued from a desperate situation by a half-starved teenage girl.

Traveling through a dark and twisted Northern California, they have only each other to rely on for survival. Together, they journey toward the angels' stronghold in San Francisco where she'll risk everything to rescue her sister and he'll put himself at the mercy of his greatest enemies for the chance to be made whole again.

MY REVIEW OF ANGELFALL (PENRYN & THE END OF DAYS TRILOGY):

Disclaimer: I’m writing this review (like most of my current ones) after having read the entire series. I will try to separate my thoughts on each book, but my brain is having a hard time since my feelings between this book and the last one are so vastly dissimilar I’m not even sure they are written by the same author.

I have to admit: I really liked the story behind this book. The idea of angels, fallen angels, and other creatures taking over the planet is an interesting concept, especially when they don’t seem to be friendly in the least.

Penryn is a likable enough character, as far as the young adult genre is concerned. There were aspects of her personality I found annoying, but probably no worse than I find most YA female protagonists. She has been hardened to a point, due to her family life and the dystopian world that she now lives in, and that makes her more believable, even if only a little. She still has a bit of that “far-too-immature-for-the-circumstances-to-be-realistic” vibe going on, a fact that annoys me possibly more than it should. Raffe, the other main character, is an enigma in so many ways. He isn’t what he always appears to be, a fact that is never more apparent than in the final few scenes of the first book. The way the twist is presented makes it even more enjoyable to go back and take a closer look at previous sections with a fresh perspective.

And that ending? Epic! Sure, it’s subtler in its epic-ness than a lot of stories, but who can wipe that image out of their minds after having read it? I don’t remember every detail of this book, but I remember that. I will never forget that.

Where it missed the mark: Despite being a good idea, despite the story itself being fantastic, the characters could have used a little more realism in their creation. Penryn might be a teen, but she’s seventeen and living in a world where she not only has to take care of herself, but also her mentally ill mother and disabled sister. Their world has been assaulted and taken over by a hostile enemy that treats them as slaves or worse. According to the book, Penryn is fairly well trained in self-defense, another factor that should help in molding her into a more mature person. I’m not saying that is always the case, but all of these factors combined do not allow her personality to strike me as true. She comes across as too juvenile at times, but I realize that these books were written for a younger audience. I just wish that Raffe’s character was mature enough to balance it out. Sadly, that is only sometimes the case. Maybe that’s just my opinion, but I think many of the tropes in these genres could be avoided with more realistic characters and dialogue.

The quest, and subsequent journey, rings true, as do many of the scenes. The story is based on some very interesting and unique ideas. The execution sometimes leaves a bit to be desired, but overall I really enjoyed Angelfall. The ending was both unexpected and emotional. The next book in the series is possibly even better, but the last book suffered from a fatal flaw that I’ll explain later on in the review.

Reading book two, World After, was even more enjoyable because of how the first book ended. It left things in a manner that set up one of the sweetest, most awesome reunions I’ve ever read. Book two takes its time getting to that moment, building up the tension and allowing us to see into more of the dynamics of this universe that Susan Ee has created. Penryn becomes a little more no-nonsense in her personality, with just enough humor to keep things easing along. Relationships between characters really start to develop. So many things could have happened in this book, but didn’t. I waited patiently for the third book to be released.

And then something odd happened. I’m pretty sure I know what the cause was, but I could be wrong. Originally, Susan Ee said that this was going to be a five-book series. Five. Not three. Want to know what I think? Well, I’m going to tell you anyways. Subsequent goings-on have made me pause to consider this theory as possibly incorrect, but here it is: I think she was forced to close out the series by her publisher. My reason for thinking this (at the time) was the possibility of her working on a new series that her publisher decided was more important. Things like this happen far more than you probably want to know. However, I haven’t seen anything new from the author, so maybe she closed it out early all on her own. I have no idea. All I know is that the story was set up to begin a new phase of the plot, and everything got pushed to the side and just…ended. No fanfare, no meaningful story, nothing. It was very, very disappointing. A new set of characters that appear in this book, characters who should (like Raffe) be older and mature, act unbelievably childish. We’re talking twelve-year-old boys here. That is not even an exaggeration. My teenage daughter was cringing at that part as well. Book three left me with a bad taste in my mouth.

Am I sorry I read it? The short answer is “no” because the parts I loved, I loved tremendously. I’m happy I read most of it. Some part of me wishes that I hadn’t read book three, but the author writes the story. That’s the story we have to live with. It still didn’t upset me as much as Allegiant (Book three of the Divergent trilogy), but I still feel that this could have been an epic five-part series instead of a pretty good three-parter.